St. John’s captain Andrew Kurowski scored two goals and the Cadets held off a late rally by defending champion Landon to defeat the Bears, 4-2, and win the school’s first MAPHL AA title before a raucous crowd at The Gardens Ice House in Laurel on Friday night.

It was a rematch of the 2020 championship game (the MAPHL cancelled the 2020-21 season because of the COVID-19 pandemic), but with a different winner and the first season since 2009 that the MAPHL’s top flight title was not won be either Landon (five titles) or Gonzaga (six titles).

Kurowski took advantage of a defensive miscue just over six minutes into the game, intercepting a pass directly in front of Landon’s goalkeeper Leo Quattrone and scoring on a nifty move to open the scoring. Andre Serra increased the Cadets’ lead to 2-0 three minutes later with an unassisted, power-play goal.

Kevin Fou got Landon on the board with a power-play strike at 6:30 of the second period. Owen Calderone and Zaakir Khan picked up assists on the play. Just 29 second later, however, St. John’s regained a two-goal lead with Connor Hall scoring the eventual game-winner at 7:59.

It looked as if the two-goal lead would hold up but a mad scramble in front of the Cadets’ net resulted in a penalty shot being awarded to Landon with just 20 seconds remaining in the game. Calderon took full advantage by deking the Cadets netminder Chase Hornbecker and making the score, 3-2.

Landon couldn’t muster the tying goal, with Kurowski capping his sterling performance with an empty net tally with 13 seconds remaining.

The Bears outshot the Cadets, 32-18, with Hornbecker making 30 saves and Quattrone stopping 15. 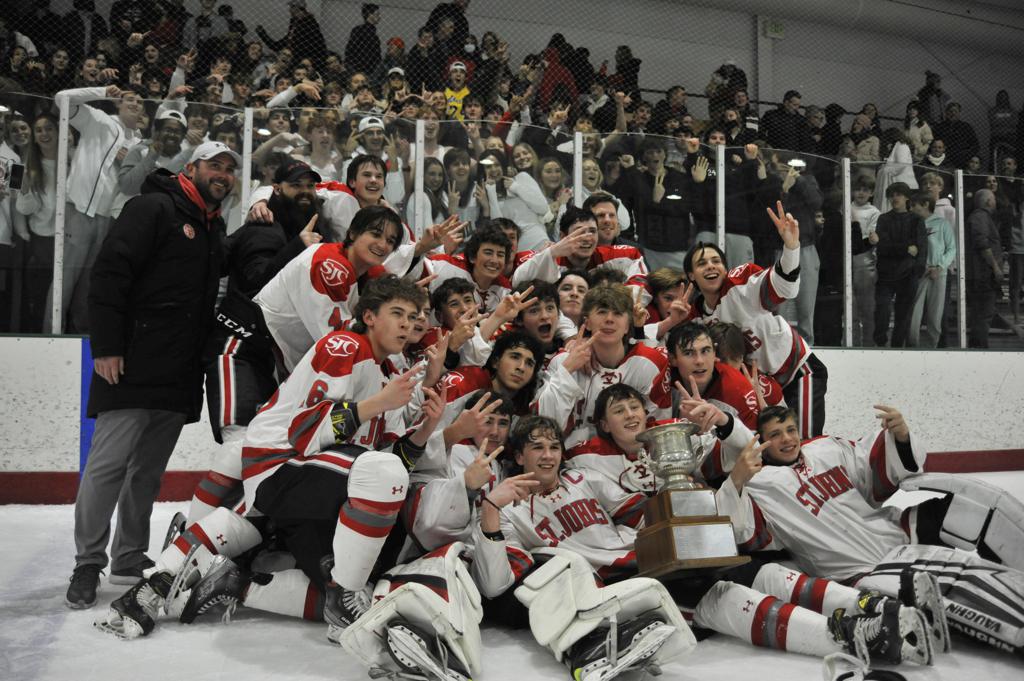 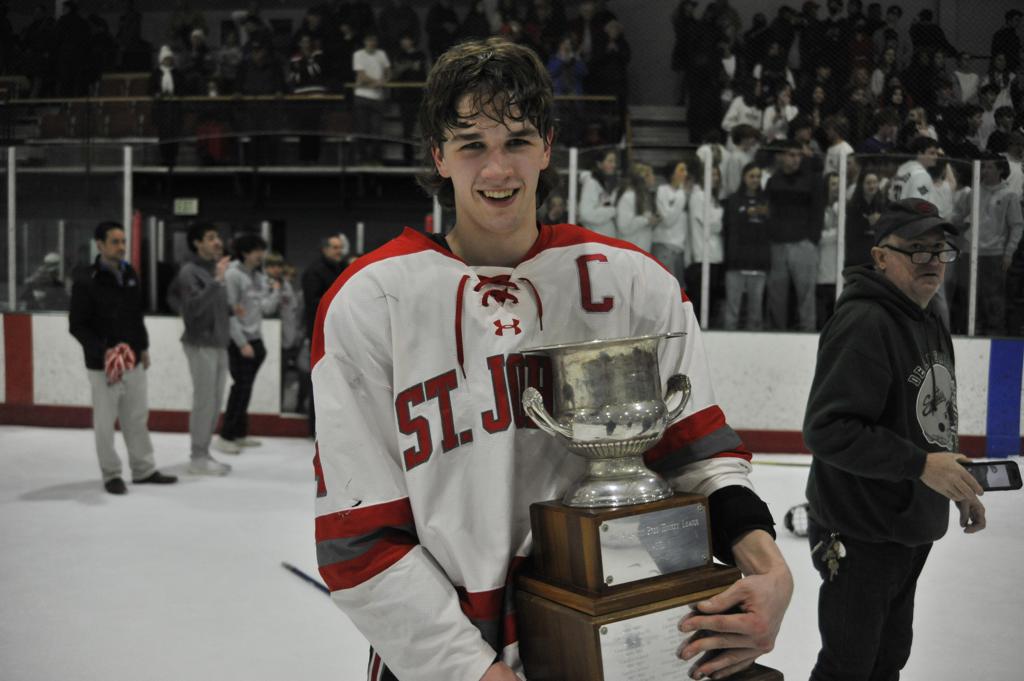 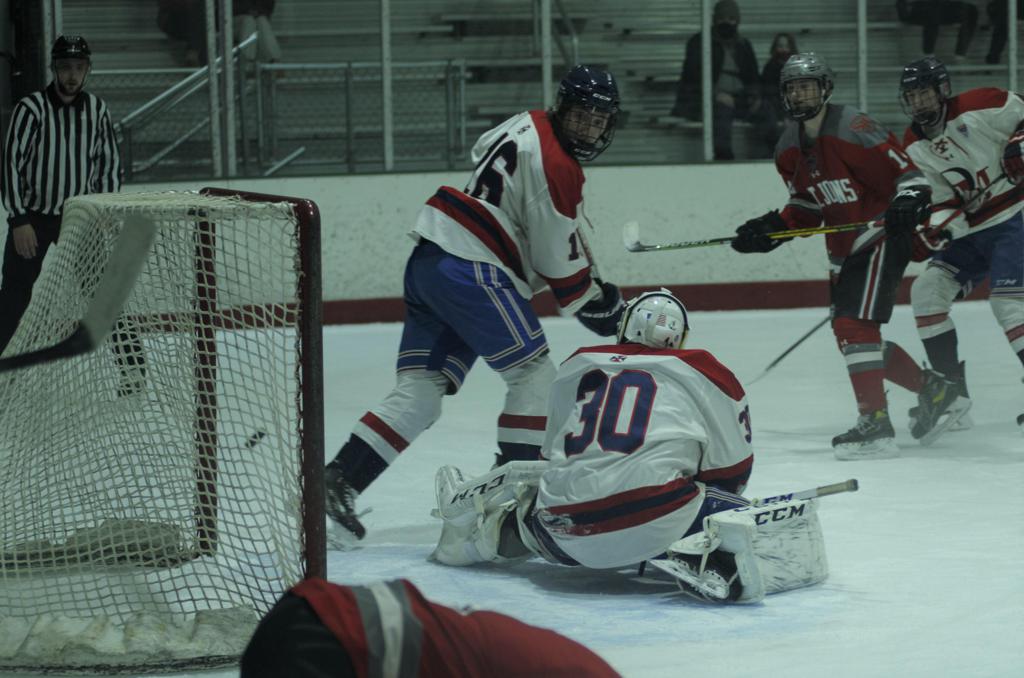 Matt Grisius (#14) scores one of his three goals in the Cadets' 5-2 victory over DeMatha at The Gardens Ice House in Laurel on Friday night.

St. John’s broke open a close game late in the second period and defeated DeMatha, 5-2, at The Gardens Ice House in Laurel on Friday night. Goaltending was a hot commodity as both netminders made numerous quality saves to keep their teams in the hard-fought game. St. John’s Matt Grisius shined on offense with three goals and an assist for four points on the night.

After a scoreless first period, St. John’s Aidan Foster got the visitors on the board first with a power play goal 4:48 into the second period. Grisius picked up the lone assist. DeMatha captain Jeremy Wilson drew the Stags even with a power play goal of their own just under four minutes later. Dylan Hendrix and Jay Harwood assisted on the goal.

It appeared the teams would go to the locker rooms at the end of the second period tied, but Grisius scored with 11 seconds to go to put St. John’s up, 2-1. Power play goals by Grisius and Carter Johnson early in the third period extended the Cadets’ lead to 4-1, putting the game out of reach for DeMatha.

With four minutes remaining in the game, Foster scored his second of the game to get the Stags within two goals. But after DeMatha pulled its goalie for an extra attacker to get them within one, Grisius completed his hat trick with an empty net goal with 2:22 left in the game. 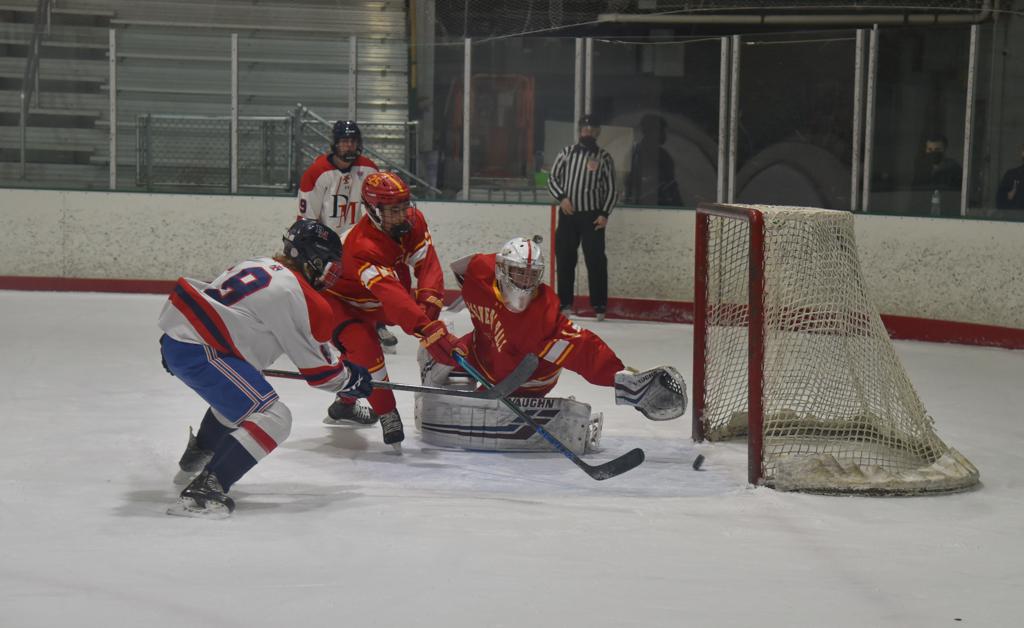 In a powerhouse MAPHL matchup at the Gardens Ice House in Laurel, the DeMatha Stags shutout the Calvert Hall Cardinals 3-0 in a hard fought game by both sides.

The Stags tallied all 3 goals in the second period, with two goals and one assist from Ryan Arendes, while Jeremy Wilson added a goal and an assist. Stags goalie Dominic Scorilli made 29 saves in the shutout effort.

Gonzaga’s Aidan Petretich scored two goals, including the game-winner, as the visitors defeated the Landon Bears, 5-2, on Monday afternoon at Rockville Ice Arena.

After trading goals in the first period—T.J. Kouba opened the scoring for Gonzaga at 12:07 and Landon’s Reid Pehrkon tied it at 13:08—Petretich scored consecutive goals to put the Eagles up 3-1. Landon’s Colin Flood scored to draw the Bears to within one, but the Bears could not get the equalizer as the second period came to close. Leo Quattrone made several quality saves to keep the Bears within one, but Gonzaga controlled play in the third period and got a goal from Will Gletner and an emptynetter from Austin Berg to seal the victory. 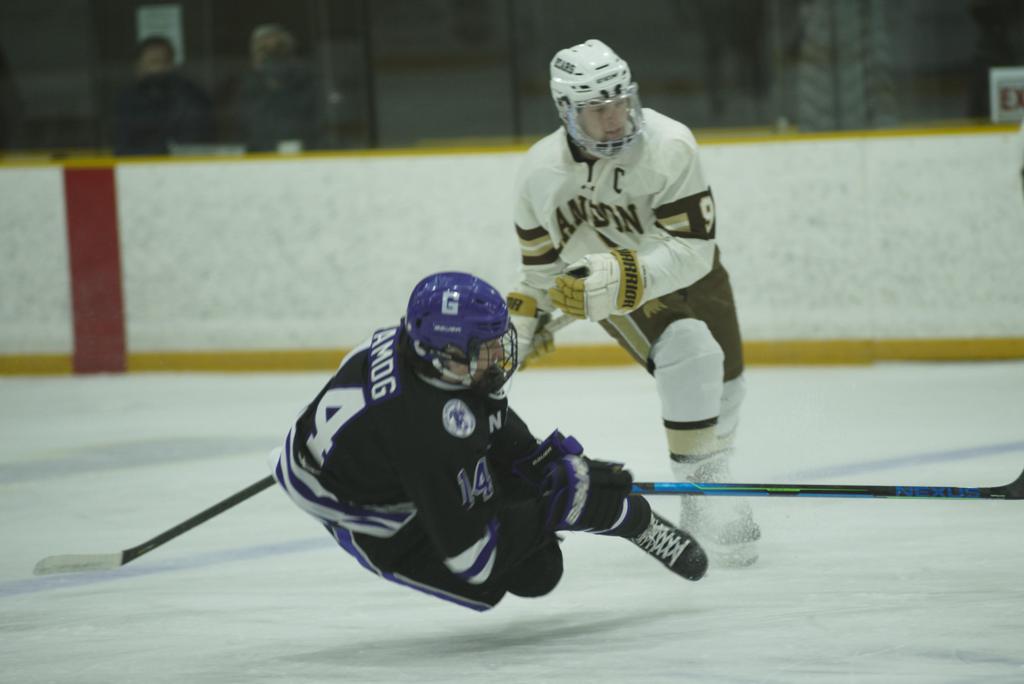 Gonzaga's Aidan Petretich defies gravity--and the Landon defense--by scoring two goals, including the game-winner, in the Eagles' 5-2 victory over the Bears on Monday afternoon at Rockville Ice Arena. 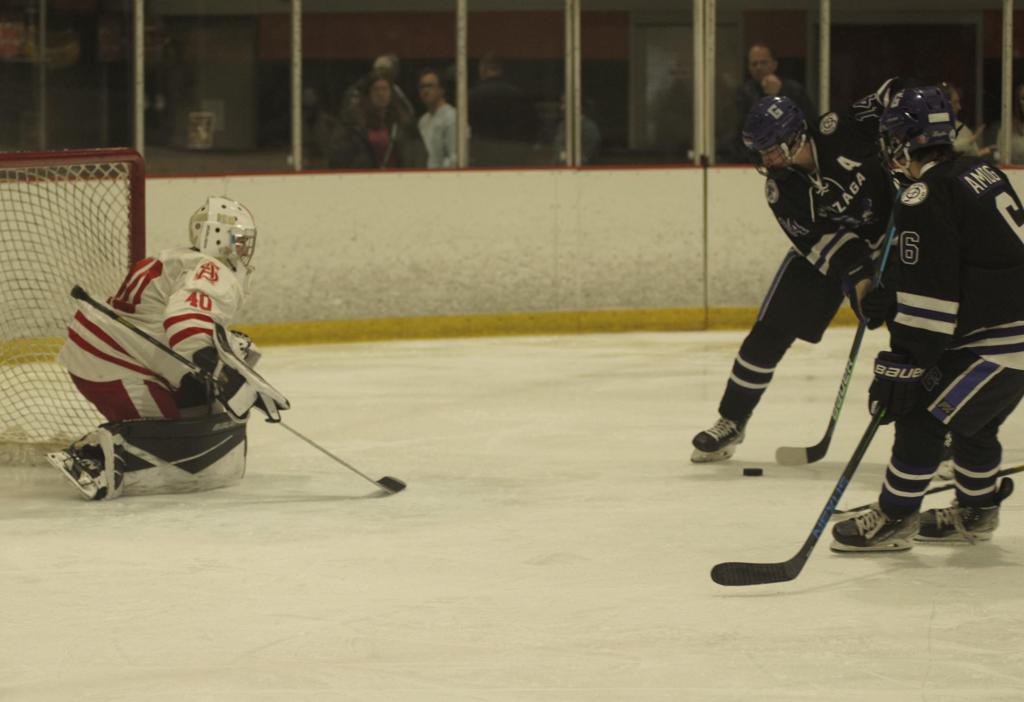 Gonzaga's Aidan Petretich scores one of his four goals against Spalding's Dylan Burcham in the Eagles' 6-0 win at Piney Orchard Ice Arena on Monday afternoon.

Gonzaga dominated host Spalding for two periods, outshooting the Cavaliers, 28-14, but only had a first period goal by Aidan Petretich to show for their efforts. The Eagles kept up the pressure and broke open the game with five goals in the third period, including three more tallies by Petretich, to cruise to a 6-0 victory at Piney Orchard Ice Arena on Monday afternoon.

Petretich assisted on T.J. Koube’s goal to finish the game with five points. Auggie Barrett also added a goal and Peter Pirone made 15 saves in goal to earn the shutout. The Eagles bombarded the Spalding net with 43 shots on goal.

Host Mt. St. Joseph and St. John’s squared off in the opening game of the MAPHL season at The Gardens Ice House in Laurel on Monday night and treated fans to a high-scoring affair in the first league action in nearly 20 months.

St. John’s Andrew Kurowski stole the show by kicking off his senior season with a hat trick in the Cadets’ 7-2 victory.

The Gaels took a 2-1 lead into the first intermission after Liam Nilan opened the scoring four minutes, 31 seconds into the game. The Cadets’ Connor Hall tied the score at 6:43 before EJ Goveia gave the Gaels its last lead of the game.

Kurowski struck just 21 seconds into the second period to tie the score and start the Cadets’ string of six unanswered goals. John Carney notched the eventual game-winner on the power-play nearly six and a half minutes later and the rout was on. Kurowski completed his hat trick with consecutive goals—including a highlight reel tally that saw the Cadets’ captain burst around two defenders, go forehand to backhand and flip the puck past Gaels’ goalie Matt Pistner—before the second period was over. Charlie Benjamin and Reilly Doherty tallied goals in the third period to complete the scoring.